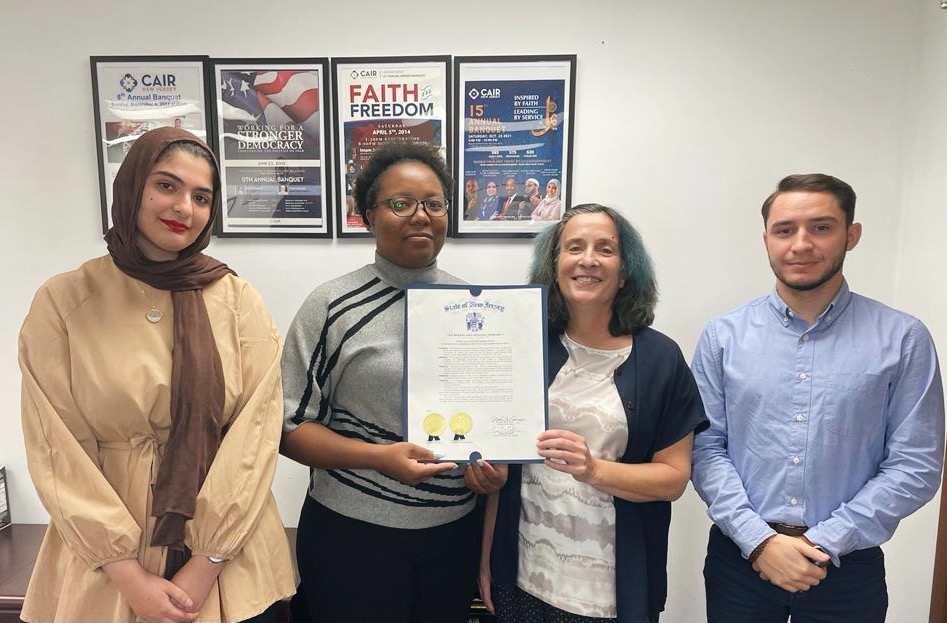 (SOUTH PLAINFIELD, NJ, 11/9/2021) – The New Jersey chapter of the Council on American-Islamic Relations (CAIR-NJ) today thanked the New Jersey Senate and General Assembly for honoring CAIR-NJ on its 15th anniversary with a joint legislative resolution.

That resolution praised CAIR-NJ’s work, paid tribute to its meritorious record of service and commitment and extended sincere best wishes for its continued success and vigor in the years to come.

The resolution was proposed by Senator Beach, Assemblyman Greenwald, and Assemblywoman Lampitt and was signed by both President of the Senate, Stephen M. Sweeny, and Speaker of the General Assembly, Craig J. Coughlin.

A duly authenticated copy of the resolution was transmitted to CAIR-NJ.

The resolution states in part:

WHEREAS, This auspicious occasion, with the theme, Inspired by Faith, Leading by Service, will recognize the outstanding achievements of the Council of American-Islamic Relations, or CAIR-NJ, over the past year that ensured justice for the embattled while fostering compassion and empathy throughout our State; and,

WHEREAS, The leaders and members of CAIR-NJ have demonstrated their unwavering devotion to the praiseworthy mission of fostering understanding of Islam, encouraging dialogue, and empowering American-Muslims through coalitions that unite people and celebrate diversity in ideas, voices, and experiences; and,

WHEREAS, Within all spheres, CAIR-NJ has established a model to emulate and set a standard of excellence toward which others might strive…

“We’re honored by this surprise resolution. Our team and I thank Senator Sweeny, Assemblyman Coughlin, Senator Beach, Assemblyman Greenwald, Assemblywoman Lampitt, and the entire New Jersey Senate and General Assembly for recognizing our organization and its achievements.

“For the past fifteen years, CAIR-New Jersey has worked to be a voice for the Muslim community and defend the civil rights of all New Jerseyans. We look forward to continuing our advocacy works for many more years to come, God-willing.”