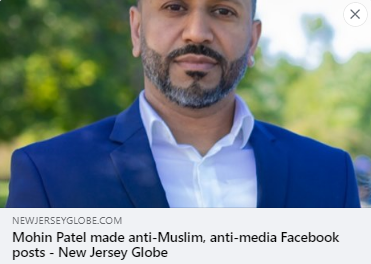 On March 9, Patel shared on Facebook a picture of a bonfire with photographs of five individuals and the flag of Pakistan. A separate post featured a comic that showed a Muslim man asking a Buddhist monk “why do you pray to a rock” before showing the man praying to the Kaaba in Mecca.

“We welcome Mr. Patel’s apology letter for his anti-Muslim Facebook posts. Such postings should never be tolerated from local leaders. Edison is a rich and diverse community, and its leaders should work to create an inclusive environment welcoming of its Muslim residents.”

Maksut also expressed concern over a racist 2017 mailer that urged residents to “Make Edison Great Again” and warned “the Chinese and Indians are taking over our town.” He echoed others in calling for the state prosecutors to identify the culprits behind what has become a 40-month-old cold case.